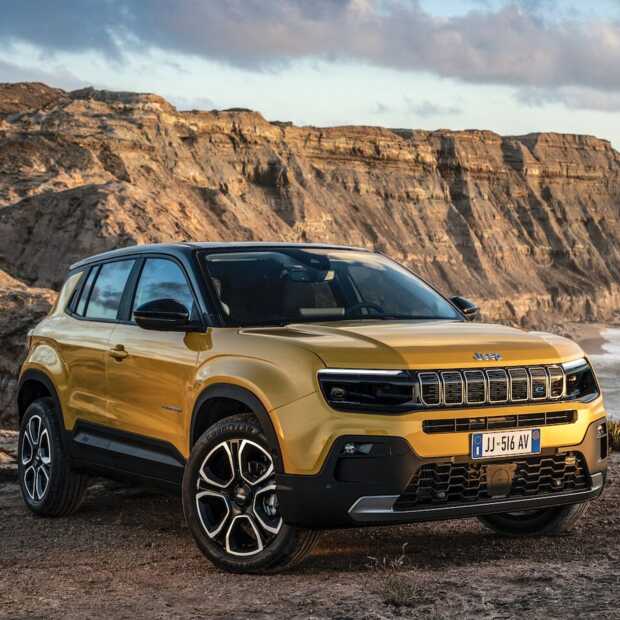 Jeep is fully committed to electrification of its models. It’s a promise that was made some time ago. The first steps were a hybrid Jeep Compass and a hybrid Jeep Renegade. Things got a little more serious when the epic Jeep Wrangler also got an electric drive, in addition to the already powerful engine of the mother of all Jeeps. The Jeep Wrangler 4Xe Plug-In Hybrid, my personal definition of the ultimate wanna have.

It is now September 8, 2022, the day that Jeep actually makes Jeep fans, EV drivers and anyone who has ever hoped to drive a Jeep happy with the announcement of four fully electric models: the Jeep Avenger, Jeep Recon and a Jeep. Wagoneer S. Number four will remain under the radar for a while. These are the first contours of that claim to the market. After all, Jeep wants to become the global market leader in electrification, say the greenest brand in the world.

There will be plenty of car enthusiasts who have their own thoughts about that. More than likely based on the rich history of the brand where maximum power, call it brute power, preferably off-road went before everything. But what has been will never come back and now certainly with Jeep.

It is the day when the choices have already been made and three new Jeeps are presented. The Jeep Avenger, a name that should especially appeal to young people and millions of film buffs, the Recon, that should be an ultimate explorer and therefore more brutal than a Wrangler, but then electric and the Wagoneer S, larger than the largest Jeep currently on the market . We are looking forward to.

Jeep Avenger, his name sounds familiar and sounds good, at Marvel they know what to do with it. However, there was once a Dodge Avenger, but apart from the name, the cars have nothing to do with each other. The Jeep Avenger looks large in the photos, but in reality it is an extremely compact SUV. And that is a great compliment because only MINI succeeds time and again in giving new models the complete DNA of the brand.

The Jeep Avenger looks like a Jeep and is a still Jeep with 7 slots. Sure, it’s a brand new concept, but it’s a Jeep in everything. And that is something that few brands dare and are able to achieve. It has to do with the DNA that is unique and recognizable. Jeep positions it below the Renegade, mistakenly seen as a small Jeep when only a few inches shorter than the Compass. We can assume that this Jeep Avenger will still have a reasonable size.

Within the range of Stellantis, enough media will link him to the Peugeot 2008-e and the Opel Mokka-e and who knows (at least that would be economically sensible) enough hidden similarities under the skin, The Avenger looks like a real Jeep and is on a brand new platform anyway. However, it is its uninhibited appearance that gives the Avenger an extra boost. Our rangers will be happy too as the new Avenger is heading towards 400km range.

The Jeep Avenger will be on display for the first time on October 17 at the Paris Motor Show. That is also the moment that you can already order Jeep Avenger (First Edition). The Avenger will go into production this year in Tichy, Poland. The market launch is sometime in early 2023.

The Jeep Recon will remain music for a while and is not expected until 2024. What applies to the Jeep Avenger also applies to the Jeep Recon. How wonderful it must be if you, as a designer, can design a new Wrangler that may not necessarily be a replacement for the Wrangler, but must contain all the DNA. Then you can let go and give the Jeep Recon its own identity, as long as it is a Jeep. It already looks fantastic, although my personal opinion is deeply colored.

To make it all a bit more understandable, the Jeep Recon is not a replacement for the Wrangler (irreplaceable too) but a completely new electric Jeep. Probably with a lot of electrical power and also the most durable Jeep that will ever be discovered in the wasteland. Let’s just hope they do the launch in Utah.

The Jeep Recon, which simply cannot be otherwise, also gets a new platform and is of course equipped with four-wheel drive and a lockable rear axle as standard. We call that outdoor first. The only downside is that the Recon will go into production in the US from 2024 and get its market launch there. It is not yet known when we will see him in Europe.

In addition to the new models, the Jeep Avenger and the Jeep Recon, there will be a new model with a well-known name, the Jeep Wagoneer S. The Wagoneer should be the flagship of the new electric fleet of Jeep. The design is of course new, but now with a clear link to the epic Wagoneer. A model with an unprecedented long history, traditional but then translated to the present. A dangerous and all the more challenging choice and equipped with a lot of luxury and comfort.

But the Jeep Wagoneer S also has seven slots and, like everyone in its family, will effortlessly ride on any surface imaginable. should be able to get off. The Wagoneer S seems to be getting some more futuristic features, but real specifications are still missing at the moment.

The all-new Wagoneer BEV will be on public display next year. Production will begin in North America in 2024. Customers in the US will be able to pre-order this all-electric Wagoneer model in early 2023. It will be sold in key markets around the world, including Europe.

The promise to the market has been made. The master plan for 2030 is clear. By then, Jeep will offer a full line-up of new battery electric vehicles (BEV), which aims to lead the brand in the SUV industry in terms of total model count, number of models per market segment and sales volume. As a result, 50% of the brand’s US sales will be fully electric vehicles.

Henk is Internet Entrepreneur, founder of Dutchcowboys and also tech and travel blogger, photographer, visual storyteller and above all a digital nomad….