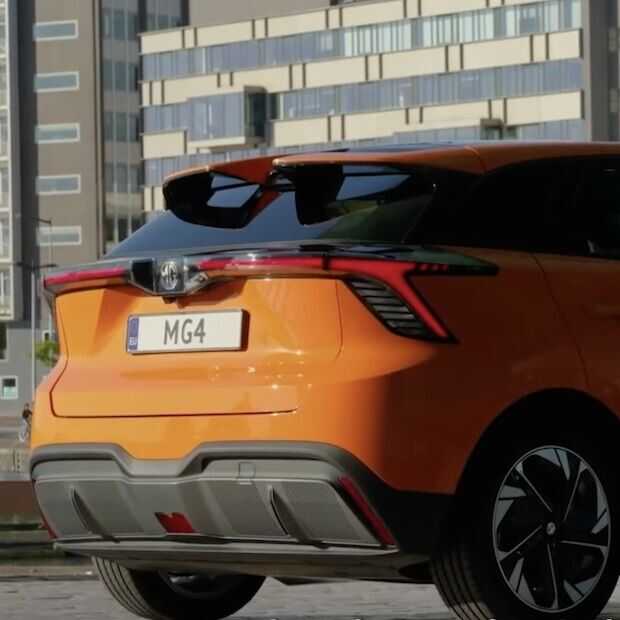 MG was once one of the iconic British car brands. The MG A and B are still very popular classic cars. You can easily pay more than 30,000 euros for a nice copy. Bolides that need the necessary love and a lot of tinkering, like many British old-timers from 50 to 70 years ago. In recent years, the manufacturer has been making a comeback, especially – or actually completely – in the segment of electrically powered vehicles. And that under the (Chinese wings) of the SAIC Motor Company. Today MG unveiled its latest EV, the MG4 Electric. During the presentation, a tip of the veil was lifted of a new, electric, MG roadster, the MG Cyberstar. It will be unveiled next year, in honor of MG’s 100th anniversary.

The latest MG EV is on the manufacturer’s brand new modular MSP platform. This is characterized, among other things, by a new battery technology, the so-called ‘horizontal Cell-to-Pack’. This makes for a more compact battery pack – only 11 centimeters ‘thick’ – with a greater energy density and a lower center of gravity. Innovations that benefit the ride quality and interior space, according to MG. According to the manufacturer, the MG4 is currently the EV with the lowest center of gravity, which is even lower than that of some sports cars. The MG4 Electric is a so-called hatchback. The manufacturer is also fully committed to a minimalist, but high-tech design, both for the interior and exterior.

The interior of the MG4 Electric

Specs and tech of the MG4 Electric

The drivetrain, rear-wheel drive, has a power of 204 hp with a maximum pulling power of 205 Nm. This accelerates the MG4 Electric from 0 to 100 km/h within eight seconds. Not exactly super fast for an EV, but that’s not what MG is aiming for. Two battery packs are available. A 52 kWh battery with a (WLTP) range of 350 kilometers and a 64 kWh variant with which you can go up to 450 kilometers. That equates to a use of approximately 16 kWh per 100 kilometres. Charging is possible with a maximum of 135 kW. This means that the 64 kWh battery can be charged from 10 to 80 percent in 35 minutes.

The 52 kWh model weighs 1655 kilograms. The custom drive mode is also new. By default you can already choose ‘Eco’, ‘Standard, ‘Sport’ and ‘Snow’. In the ‘Custom’ modes you can decide for yourself which mode you choose for certain driving characteristics, such as the steering, power, braking power and suspension. In addition, the MG4 also has break-by-wire.

With a length of 4 meters 28, width of 1 m83, and height 1 m50, the MG4 is clearly a compact electric hatchback. Thanks to its relatively large wheelbase of 2m70, however, according to MG, it is spacious enough for five people. With 363 liters, the trunk is not really big. To ‘compensate’, MG has provided this new EV with 28 compartments and trays in the car itself, such as a holder for your (sun) glasses in the roof and a place for wireless charging of your smartphone.

For comfort, the MG4 Electric is also equipped with an infotainment system with links for smartphone, navigation and the like. To make driving safer and easier, the new MG also has the necessary drive assist functions, such as 360 degree cameras, radar, parking aid, traffic information and adaptive cruise control.

At a later stage there will also be a version with a 77 kWh battery pack that will have a range of more than 500 kilometers. When it will be released is not yet known. The same goes for the four-wheel drive sports model. It gets twice the power and acceleration from 0 – 100 within 4 seconds.