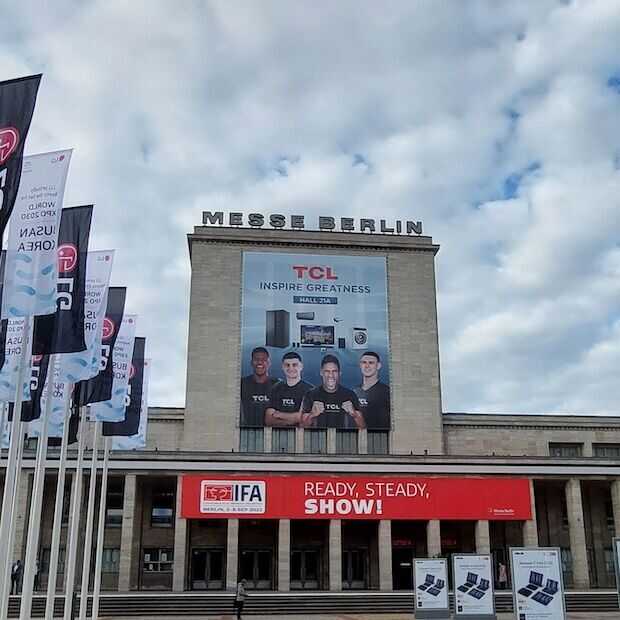 After two years of absence – we all know why – the Internationale Funk Ausstellung (IFA) is back. I haven’t missed an edition since 2008, and I didn’t plan to this year either. Today, after two press days, is the first real day of the fair and an ideal moment to see whether, and if so how, the IFA has changed after ‘C(orona)’. Spoiler alert: the IFA is definitely not the same anymore. In short: less crowded, notable absentees and half-filled halls.

Let me start with that last one. During the press day, Thursday and thus barely 16 hours before the opening of the trade fair, I did not only notice that in many halls there are clearly fewer stands than ‘before’. There are even some halls that are literally only half full. And the six, albeit slightly smaller, halls around the Funkturm (12 to 17) are even completely empty and closed.

At that sight, a CeBIT feeling came over me, especially from the last years of CeBIT. Every year fewer exhibitors, half-empty and closed halls and ultimately only half of what it once was, both in terms of exhibitors and visitors. After a desperate attempt to make CeBIT hip – in 2018 – the curtain finally fell. Is the IFA heading in the same direction?

Not all halls are filled at the IFA this year

Of course, nothing can be said about the visitor numbers of the IFA now, on the first day of the exhibition. The half-empty halls and conspicuous absent exhibitors is of course not a good sign. I’ve been coming in to Hall 20 every day for years. That was always the ‘Sony Hall’, but Sony is perhaps the most notable absentee from IFA this year.

In order not to leave the hall empty, the province of the Berlin region (Brandenburg) has now filled this hall with local startups, tech and gadget manufacturers. They may not have intended it that way, but the use of untreated wood in the standard stands gives the impression that this hall and stands have been cobbled together very quickly, almost in a panic.

The ‘Sony hall’ is filled with ‘local’ exhibitors this year

Still, I think there is no reason to panic for the time being. The fact that there are fewer exhibitors is of course also related to Corona. The decision to participate in an exhibition like the IFA has to be made many months in advance. At the beginning of this year, until spring, we faced a completely different corona situation than now. It’s not surprising that some companies, with Sony as the most prominent example, have decided to skip the IFA for a while again this year. Not in the least because it could have just happened that the fair would not take place this year either.

In addition, the economic situation has changed slightly since the end of February. We are in a major energy crisis. This comes on top of the logistical (transport problems) and raw materials (chip shortages) crises that have plagued the (tech) world for some time. Fewer stands, so room for a ball pit It wasn’t really busy yet, on Friday

After the IFA opened its doors to the public at 10:00 a.m. on Friday, it soon became apparent that significantly fewer visitors paid a visit to the fair this year. Of course, Friday is a working day and so there are traditionally many young people (students) who go to the Messe, but there were also fewer than in the last years before corona. I will therefore be curious as to whether the queues at the entrance will be longer tomorrow (Saturday).

Less crowds also have their advantages. Visitors have more space and that also applies to us, the press. Although we can already enter on Wednesday and Thursday, construction is still in full swing and there are mainly planned press conferences and ‘booth tours’. Most stands are only interesting to view when the fair is actually open, so from Friday.

It seemed a bit busier at LG, but in previous years there was almost no way through at this stand.

Trends: more of the same, but new

Of course there is also a lot of news to see at the IFA. This year, the dozens of stands with e-steps and electric folding bicycles stand out – urban personal transport and e-mobility, so to speak. Furthermore, the major brands such as LG, Philips and Panasonic mainly concern new (larger, faster) versions of existing products. And, in my view, frenetic attempts to make existing products even more interesting or striking.

An example of this is certainly the refrigerator with OLED panels in the doors. No, no built-in OLED TVs, but panels that you can change color with an app. It gave me the impression that LG has been diligently looking for new applications for the screens that LG displays produce, but which can no longer be ‘phased out’ into full-fledged TVs due to the chip shortage. ‘Then we’ll make colorful fridge doors out of them’… or something like that.

The fridge with OLED panels that you can change color. Note: The four panels in the middle (including the see-through window) together form the refrigerator. The panels that you still see on the left and right are mirror images.

I have already mentioned the absence of Sony, but at the IFA of 2022 the absence of the Automotive industry is also striking. While car brands such as Ford and BMW still prominently displayed their (e-)mobility solutions and software at the IFA, the car manufacturers shine this year because of their absence. On the first day I only saw Vinfast and a special Rolls Royce converted to EV from the 1970s.

Oh yes, and then this. In the coming days, all attention in the Netherlands will be on Formula 1. The Zandvoort Grand Prix is ​​on the program and ‘our’ Max is the favourite. I think I ran into the Ferrari leak here in Berlin. Outside the Media Center stood the ‘old’ Ferrari of Carlos Sainz. It also didn’t start. What seems? It has Snapdragon processors in it. Well, then of course you bring the problems on yourself 😉

So much for the first day of IFA for me. EV manufacturer Vinfast is one of the few automotive brands in Berlin The Rolls converted to EV The ‘leak’ of Ferrari Ron Smeets