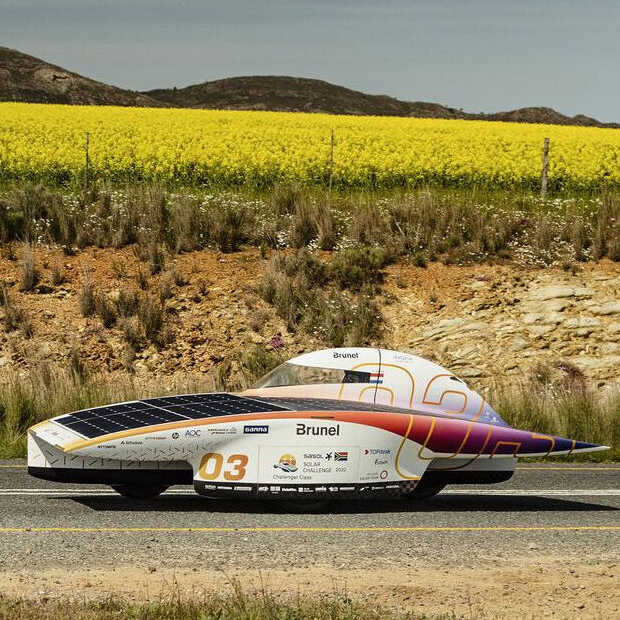 The Brunel Solar Team has won the Sasol Solar Challenge in South Africa this Friday. The Dutch team had the most kilometers on the clock and thus took the first place. The Belgian team, with which they continuously competed for the title, ended up in second place with a difference of 38 km. It is the first time in three years that the Dutch team is again able to beat current world champions Belgium.

At 3.37 pm the Brunel Solar Team crossed the line in Cape Town, with a total of 4,223 km on the clock. That is no less than 38 km more than the Belgian team. Team captain Sanne Vilters is proud: ‘The past few days we were really close to each other. However, during each day break we kept repeating that we had to focus on ourselves and not worry about the other teams. Everyone has their own task within the team and only if everyone performed that task at their best could we win. That we have now succeeded proves that we are a very strong team and of course that we have a magical car!’

From Johannesburg to Cape Town

In the eight-day challenge from Johannesburg to Cape Town, it is all about the total number of kilometers driven. Each day there is an optional run that teams must race as often as possible. The mandatory stop every day is at 5:00 PM.

The fact that both solar cars are evenly matched has been apparent from the start of the challenge in Johannesburg. The Dutch and Belgian teams follow each other closely and the leading position was constantly alternated. By making smart and creative choices, they tried to surprise and outsmart the competition. Bizarre: before the start of the last day, the lead of the Brunel Solar Team over the team from Belgium was only 10 km (!).

Towards the final day, the tension continued to mount. The battle was fierce and both teams pulled out all the stops to win. The last day started with a time penalty for both teams, the Dutch team got this because of a (minor) collision during an overtaking manoeuvre, the Belgian team for exceeding the speed limit on African roads. Also, both teams arrived late at the day break.

Due to the time penalty for arriving late yesterday, Nuna left today from the second to last position, 10 minutes behind Belgium. The Belgian team was thus in the lead until the running stop, but the gap was gradually reduced to less than a minute. Both teams immediately decided to do the control stop, the daily mandatory stop of 30 minutes, in order to be able to load statically.

After the control stop, the Brunel Solar Team immediately started driving loops. The Belgian team followed, but had to be pushed off the road just after the running stop due to a faulty battery. The 30-minute repair put them at a significant backlog. While riding the loops, they couldn’t make up for the distance Nuna had covered in the meantime. At the finish at 3.37 pm the Brunel Solar Team therefore finished in first place with a 38 km lead.

Besides stimulating innovation in the field of solar energy, the challenge also serves another purpose: to inspire the local population. The daily location of the walking stop is usually on the site of a (secondary) school. Local residents can not only admire the solar cars there, but also participate in experiments showing how solar energy works. In a country where electricity is cut off for a few hours a day, the need for the energy transition is obvious. By inspiring the new generation, the organization hopes to accelerate the transition in South Africa.