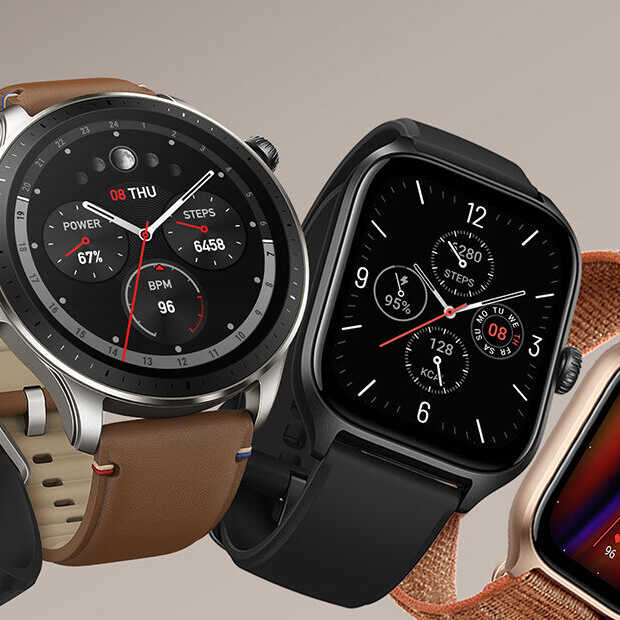 Amazfit is working hard to become a major competitor of Fitbit and it is now doing so with the introduction of three new smartwatches. GTR 4, GTS 4 and GTS 4 Mini are smartwatches that are mainly focused on health and sports.

Amazfit can still work on nice names, but the three new smartwatches are the fourth generation of the brand’s wearables. During IFA in Berlin, it unveiled its new smartwatches, which are mainly an extension of predecessors GTS 3 and GTR 3. They are made to give people more insight into their sports performance and their health, in addition to showing the time.

The smartwatches contain more than 150 sport modes and advanced fitness functions, with which athletes can collect and keep track of their personal data. The new feature of the watches is that they can automatically recognize eight additional sports. So if you forgot to put your smartwatch in sport mode, it probably did this automatically once you’re up and running. New are the possibilities for golfers, who have an even better sports experience when they are on the golf course with the Track Run mode and Gold Swing mode.

A connection is possible between Strava and Amazfit, allowing runners and cyclists to accurately record their workouts as well. Later on, Adidas Running will be added. In terms of strength training, the watches will soon be able to recognize 25 different workouts, including the number of reps, the rest time and the sets. Interval training is also an option, and then there’s PeakBeats, an algorithm that provides more insight into your workout once it’s completed.

The GTR 4 and GTS 4 have dual-band polarized GPS antennas, which should make navigation even more accurate. At the moment, the watches can work with five satellite systems, with another one to be added later, as well as the option to import routes from Zepp. This allows you to follow a route in real time, so that you can make another run.

The BioTracker 4.0 PPG optical sensor developed by Amazfit itself now collects 33% more data than the previous generation. The algorithm to measure heart rate has also been improved. Amazfit smartwatches can measure heart rate, blood saturation value and stress levels. You can do that for a long time: the GTR 4 has a battery life of no less than 14 days with standard use, while the GTS 4 lasts longer than a week. There is also Alexa Voice Assistant integration in both of these watches.

The Amazfit GTR 4 (good to know: ‘R’ stands for round) has glass and metal and comes with 200 backgrounds to choose from for the always-on screen. More than 30 of these wallpapers are animated and four new ones are interactive. The Amazfit GTS 4 (not entirely surprising: ‘S’ stands for square) takes on a slim shape of only 9.9mm and 27g. It has a 1.75-inch HD AMOLED display and includes 150 backgrounds for the always-on display.

In addition to the regular GTS 4, Amazfit is introducing a mini variant in the Benelux: the GTS 4 Mini. Even lighter and more compact, this watch includes detailed health monitoring, over 120 sport modes and a 1.65-inch HD color display. With its 270 mAh battery, the watch can last 15 days. When the battery saver mode is turned on, this amount can go up to 45 days.

The Amazfit GTS 4 has a suggested retail price of 199 euros and that of the Amazfit GTR 4 is 229 euros. The GTS 4 Mini is available for 99 euros. The watches will be released in the fall of this year.